(This post was originally published on Tech in Asia. I've made some minor edits since to reflect some changes that have taken place.)

Zopim is all the rage right now. Founded by graduates of NUS, and nurtured tirelessly from 2009(!), Zopim has finally come of age. It is a really interesting case. A pure B2B product, unlike social networks, there is no virality, and since so few users from the free tier graduate to become paying customers, each new user's LTV is not large enough to justify hiring a dedicated sales force. for a product of its type, seo and sem/ppc should be a top concern, which makes them a perfect candidate for an audit of both SEM and SEO. If you consider SEO and SEM to be vital tools in your marketer's toolbox, read on. (If you missed my earlier post on how to do a basic SEO audit, you can read up here.)

The foundation of our audit is keywords. In order to find out what keywords are likely to be important to Zopim, we'll use the Google Keyword Planner. Skipping ahead a little, a quick search turned up the following keywords that are likely to be effective for live chat providers like Zopim.

This is one heck of a scary list. There are no keywords aside from brand ones that are cheaper than S$3.50, and the most expensive one is over S$15 dollars. If you had a landing page for this niche that received 2000 visitors per month at a S$5 CPC, and you converted 100 of them into free account users, you are S$10,000 in the red for just some free users. For this SEM campaign to be profitable, a customer's LTV must be upwards of S$100 (S$10,000 cost divided by 100 customers). Fortunately, Zopim's pricing plans start from $11 dollars, which means it is probably viable for them if something like 55 out of the 100 signups end up using a paid plan for 2 years. For me it reinforces the philosophy of data-driven decision-making. If you are running SEM campaigns and have had your manager turn down requests to scale up a campaign with a good conversion rate because the keywords are "too expensive", you would know what I mean. For most aspiring startups without Y-Combinator level credentials though, SEM for this niche would be a non-starter. 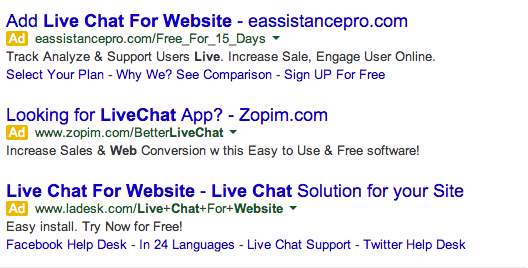 Here are some of the ads that are running for Zopim SEM currently. Despite the fact that they are competing aggressively in a tough market, it looks like the types of keywords they target aren't as extensive as expected. From the table above, "live support chat" isn't currently triggering ads, which is strange because they actually are the 3rd result on Google for the term. It is understandable if they opt to forgo "customer service chat", which is prohibitively expensive, but being at 3rd position for "live support chat" practically guarantees a good Quality Score, which means lower CPC cost for a higher position. For now this just seems like a missed opportunity.

Speaking of Y-Combinator, there is a YC backed competitor to Zopim called Olark. We'll be using them as a benchmark / comparison for some basic SEM figures, as well as some Google Trends goodness.

The global monthly search volume for Zopim is 4 times more than Olark. At first glance it looks like Zopim is miles ahead in brand recognition. Let's shine some light on the actual data with Google Trends.

In March 2010, Zopim became more popular in search than Olark, and hasn't looked back since. This shows us that the figures we have above are likely to change as the gap (potentially) widens. However, these 2 companies are based so far apart geographically (USA vs Singapore) that it hardly makes sense to compare them only head-to-head.

Digging a little deeper, we can see that they are most popular in somewhat dissimilar markets. Among their top 5 markets, only Turkey and UK are overlapping. Zopim's top 10 list does not include the United States. To digress slightly from the topic, this may partially explain why Zopim attracted Zendesk's attention in the first place, and why it could be a terrific acquisition for them in terms of expansion to non-US markets.

I went ahead and created the table above from the keywords we looked at earlier. Relative position means higher or lower than Olark. As you can see, Olark ranks higher than Zopim for most of the searches. The competition for these keywords is uber-intense! Every competitor ranking high for "live chat software" has PageRank of between 6 (yahoo) to 8 (gmail). It's the gladiator pit of SEO! (Update: PageRank is no longer considered authoritative so I reran the figures with Moz' Domain Authority metric, and Zopim occupies eighth spot but has the third lowest Domain Authority of all competitors on the first page.) 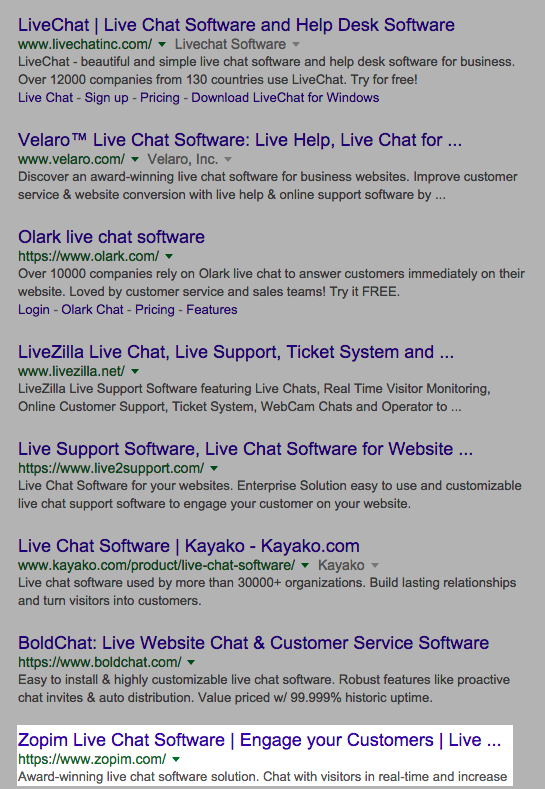 Some quick digging revealed what is probably the reason for the amazing SEO of these companies. Every time a customer embeds their chat widget on the customer website, a backlink is made to the chat company's site, giving a small but important boost to the chat provider. Multiply that by tens of thousands of client companies and you have a veritable fortress of SEO! SEO this good can't be bought. (Update: I believe that it's no longer permitted for live chat services to place a link on customer chat widgets unless the link has a nofollow attribute.)

This isn't to say that Zopim's SEO is flawless. The homepage and 3 others (pricing, product, why zopim) all have unique titles but odd titles. While the homepage and pricing page have fairly useful titles like "Zopim Live Chat Software | Engage your Customsers | Live Support", and "Zopim Pricing | Free Live Chat Trial | Affordable Pricing", the product page and why Zopim page are awkward - "Zopim Product | Intuitive Widget | Powerful Dashboard" and "Why Zopim | Great Customer Service | Uptime | Integrations". To top it off, the pages all share the same meta description, which is a big missed opportunity. A better strategy might have been to create pages that target the top 5 or so organic keywords that bring the most signups. If for instance "online customer service chat" has low traffic but converts more visits to paying customers than any other keyword, perhaps a page addressing that segment could be created, which would be even more targeted to the user's needs. Incredibly, this could very well make Zopim's SEO even more terrific than it currently is.

Overall, we've seen some admirably aggressive SEM based (probably) on conversions grounded in hard data, as well as smart usage of SEO that intelligently skirts the boundaries of what is considered 'halal' by search engines. There is a goldmine for B2B software companies to learn from in this example and hopefully this post brings some of it to light for all.

In case of any violation of these rules and regulations, LEAN METRICS reserves the right to seek all remedies available by law and in equity for such violations. These Terms and Conditions of Use apply to all visits to this website, both now and in the future.

LEAN METRICS reserves the right to change these Terms and Conditions of Use from time to time at its sole discretion. All changes will be posted on this page, and your use of this website after such changes have been posted will constitute your agreement to the modified Terms and Conditions of Use and all of the changes. You should therefore read this page carefully each time you visit this website.

The materials located on this website, including the information as well as any software programs available on or through this website ("the Contents"), are protected by copyright, trademark and other forms of proprietary rights. All rights, title and interest in the Contents are owned by, licensed to or controlled by LEAN METRICS.

Except as otherwise provided, the Contents of this website shall be governed by the Creative Commons Attribution-ShareAlike 4.0 International (CC BY-SA 4.0) license

Disclaimer of Warranties and Liability

To the fullest extent permitted by law, LEAN METRICS does not warrant and hereby disclaims any warranty:

as to the accuracy, correctness, reliability, currency, timeliness, non-infringement, title, merchantability or fitness for any particular purpose of the Contents of this website; and

that the Contents available through this website or any functions associated therewith will be uninterrupted or error-free, or that defects will be corrected or that this website and the server is and will be free of all viruses and/or other malicious, destructive or corrupting code, programme or macro.

You agree that you will not:

use any device, software or routine to interfere or attempt to interfere with the proper working of this website; and

take any action that imposes an unreasonable or disproportionately large load on LEAN METRICS's servers.

All hyperlinks to other websites are provided as a convenience to you as a user of this website. The inclusion of any hyperlink does not imply endorsement by LEAN METRICS of such websites. In no circumstances shall LEAN METRICS be considered to be associated or affiliated in whatever manner with any trade or service marks, logos, insignia or other devices used or appearing on websites to which this website is hyperlinked.

These Terms and Conditions of Use shall be governed and construed in accordance with laws of Singapore.